Sundry or Sundries are generally ‘miscellaneous’ values. They can be either a positive or negative (as mentioned in the sundries article here).

However when using the Malgra Spreadsheet, the system advises only to put expenses in the sundries box, and to take caution if the value is different to £1. This article explains why.

Background to the Sundries Function

Generally speaking, every consultant will have one key expense – the XPW Maintenance Weekly Fee. This is a nominal amount of £1, paid directly to Slimming World. It is designed to cover some costs towards the kit which is provided to you, and allow for any replacements / technical support etc.

This amount is an expense, and other expenses may also be added to this section. For example, previously CityGroup expenses (where you’d incurred charges using courier and SW paid these) would be created back to you.

On the example PFS Document above, the sundries column is always £1, therefore this can be added to the spreadsheet as the final figure in the last column, £5, which is the calculation of 5 weeks on this example at £1 per week. Remember not to put it in as a negative number, just put in as ‘5’ – the spreadsheet will automatically work out the calculation for you.

However if it’s different to £1, it’s likely something has happened in the background. The below example takes you through this, and what to do.

In this example, we would be completing our spreadsheet or Malgra Accounting document as usual. However when checking the monthly PFS, there is an unusual value within Week 3.

Although every week is showing £1 (and when we check the weekly summary, it’s the XPW Weekly Fee), in Week 3, there is a value of 24p which is being credited to the consultant. This has then meant the amount taken as an overall expense is £3.76, when we would have expected £5.00 (5 x £1 per week).

As such, we’ll need to check the weekly summary to see what has happened in the background. 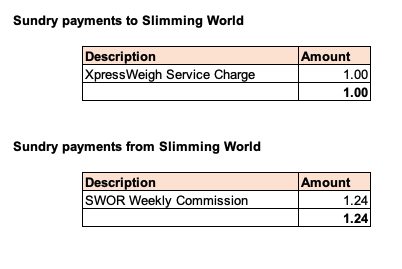 From the weekly PFS document, we can see there are two amounts which have been calculated in this transaction.

Adding the values to your Spreadsheet

On your spreadsheet, you would do the following transactions:

In the PFS section

Add the expense as £1 as usual for this week, so with our PFS example, that would be £5 in total

In the Income Section

Add the SWOR Payment in the ‘Other Income’ section to show the full amount credited. 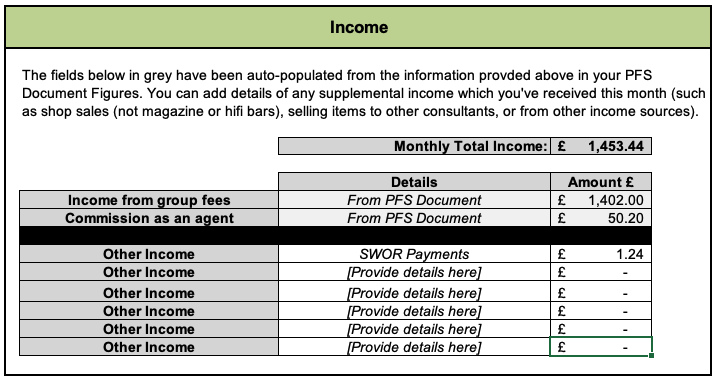 The system will then make the correct calculations for your accounts.

Although in this example, it doesn’t appear a large amount, any transaction must be added to your business accounts to show a true reflection. If you have a lot of credited sundries, such as SWOR or Gift Voucher income, this can add up.

Was this article helpful?

We use cookies on our website to give you the most relevant experience by remembering your preferences and repeat visits. By clicking “Accept All”, you consent to the use of ALL the cookies. However, you may visit "Cookie Settings" to provide a controlled consent.
Cookie SettingsAccept All
Manage consent

This website uses cookies to improve your experience while you navigate through the website. Out of these, the cookies that are categorized as necessary are stored on your browser as they are essential for the working of basic functionalities of the website. We also use third-party cookies that help us analyze and understand how you use this website. These cookies will be stored in your browser only with your consent. You also have the option to opt-out of these cookies. But opting out of some of these cookies may affect your browsing experience.
Necessary Always Enabled
Necessary cookies are absolutely essential for the website to function properly. These cookies ensure basic functionalities and security features of the website, anonymously.
Functional
Functional cookies help to perform certain functionalities like sharing the content of the website on social media platforms, collect feedbacks, and other third-party features.
Performance
Performance cookies are used to understand and analyze the key performance indexes of the website which helps in delivering a better user experience for the visitors.
Analytics
Analytical cookies are used to understand how visitors interact with the website. These cookies help provide information on metrics the number of visitors, bounce rate, traffic source, etc.
Advertisement
Advertisement cookies are used to provide visitors with relevant ads and marketing campaigns. These cookies track visitors across websites and collect information to provide customized ads.
Others
Other uncategorized cookies are those that are being analyzed and have not been classified into a category as yet.
SAVE & ACCEPT